Many people think that modern day Igbo sacred sciences (Odinani) is a good overall representation of the very ancient metaphysical systems. They are very incorrect. In fact, the decline of the divine Kingdom of Nri and the rise of the European controlled Atlantic slave trade corrupted Igbo civilization. British colonialism and the Nigerian Civil War practically destroyed what was left of Igbo civilization. What is left of Odinani is only a very faded shadow of how it used to be. 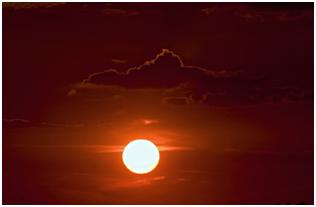 Anyanwu (Eye of Light) : The Igbo divinity that dwells in the sun

Although Odinani is one of the oldest science systems in the world, we will just briefly discuss the last one thousand years. Nri Kingdom (in present day Anambra State) was a major power in present day Eastern and Midwestern Nigeria from 1000 A.D. to 1600 AD.  Unlike most kingdoms, Nri did not gain their influence nor maintain it through military force. Nri’s influence came from metaphysical power. Their culture, tradition, and philosophy was centered on peace, harmony, knowledge, wisdom, justice, and oneness with Creation (Chi, Aja Ana, Anyanwu, Igwe, and etc) and the Creator (Chineke). Eze Nri (Divine king of Nri) was the traditional Igbo pope and he and his mediators (real Nze and Ozo men) spread peace and civility throughout the land and found many settlements abroad. The Nri are responsible for the Igbo Ukwu sites, Four market days, Ozo/Nze title systems, Igu alu, and etc. Unfortunately, between 1400-1700 Nri declined due to internal disputes, the slave trade (which was illegal in Nri), and the rise of rival states.

One of the many famous Igbo Ukwu bronze castings

In the late 17nth and early 18nth century, the Aro Confederacy (their capital Arochukwu is in present day Abia State) was formed and quickly became a major economic power in present day Eastern Nigeria. The Aro people were expert long distant traders that developed and controlled a complex trading network in the region. The Aros were also known as priests and agents for their famous Ibini Ukpabi (Drum of the high God) oracle that was located in Arochukwu.  After Aro conquest, Ibini Ukpabi was also used as an oracle to settle disputes serious disputes and problems. The oracle quickly became popular for its effectiveness, accuracy, and its useful divinations. Ibini Ukpabi became the main oracle in the region and beyond for many years until the early stages of British colonialism in the 20th century. However, shortly after Aro expansion, the Europeans increased their slave trade interests on the Bight of Biafra. This brought chaos.

Igboland and adjacent areas was very violent and chaotic in the 18th century as the result of the Atlantic slave trade. Some oracles in Igboland such as Ibini Ukpabi unfortunately became commercialized. Although many agents and priests of the oracle continued to do honest and fair work, others used the opportunity to sell innocent people as slaves. The Slave trade also introduced the outrageous Osu caste system in Igboland. Initially, Osus were very sacred and respected assistants to high priests. However, as a result of the slave trade, wars in Igboland increased and many people (including runaway slaves) sought refuge in shrines and become an Osu. In some cases, criminals also decided to be an Osu rather than becoming enslaved. Suddenly, being an Osu became a taboo.

British colonialism and Christianity tried to destroy what was left of Odinani. After the 1901-1902 Anglo-Aro War, British troops attempted to destroy the Ibini Ukpabi shrine. The British even called the Nri people, a group that has always stood for justice and peace, evil. Initially, Christian missionaries referred to Odinani as totally evil and tried to force the population to convert. Although Igbo people embraced Western education, they heavily resisted colonialism and the British efforts to destroy their tradition. While the British condemned our culture, they did absolutely nothing to help it. Many Igbo people (Osus were among the first) did convert to Christianity but there was still respect for the many good aspects of Odinani and Igbo culture overall. A strong traditionalist population was still among the Igbo before Nigerian “Independence” (1960) and the Nigerian Civil War (1967-1970). After the brutal Civil War, more missionaries came to a war torn Igboland in the 1970s and began the evangelical movement. This movement has been very devastating to Odinani and Igbo culture in general. Some foolish and overzealous Christian youth have looted and destroyed shrines and priceless artifacts. And what have they gained? Absolutely nothing! Instead of creating jobs, developing Igboland, and becoming self sufficient some misguided youths have decided to take the place of the European missionaries and destroy their own Igbo culture.

Igboland in modern times is lawless and very violent. We have been losing wars for our freedom and now have lost our minds because we are fighting a war against ourselves. The land is very underdeveloped and polluted. Many Igbo people at home and abroad have completely turned their back on our ancestors and put a much higher value on Western culture. Many Igbo children have close to no knowledge of their own people. IGBO PEOPLE THIS IS A EMERGENCY. PLEASE LISTEN! Unless we get back to who we are and revive/improve on the productive aspects of our sacred science system or “spirituality”, get rid of outrageous aspects of our tradition like the Osu caste system, stop putting useless foreign institutions over our own WE WILL CONTINUE TO BE IN DEEP TROUBLE!